It’s been almost exactly 1 year since my knee op. It was the 2nd of October last year when I went under the knife. I have been training hard and going through loads of rehab to get back to my former self. I hit quite a high point with my send of Rolihlahla, but since then I’ve been fighting quite an uphill battle. Been spending a great deal of time at Chosspile, working on finalizing Shadowfax (8b+) but due to the early onset of summer, I abandoned it for the season.

As a result, I started heading through to Boven a bunch. Jumped on Backcountry Butcher (8b) and was getting really close to the send when I broke the key hold. The result of this was that I had to abandon the climb for the weekend. It did inspire me to get back on Rodan and I’ve been obsessed ever since.

I did head back there and fix the hold at least. Now this is where the ethic issue, should I have fixed it or left it as it became? 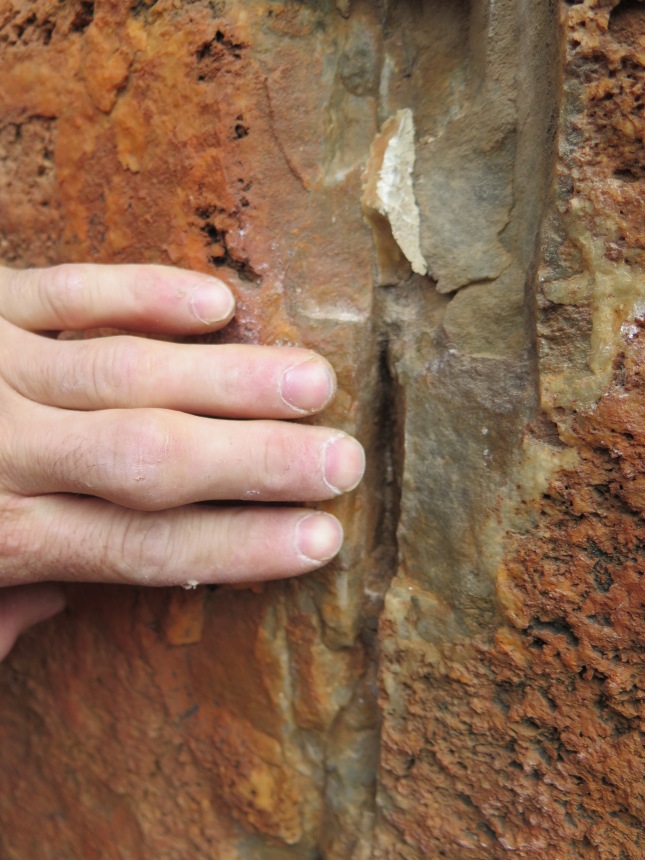 The tiny gaston that was revealed. It feels much worse than it looks and it looks small and slopey

I tried the move a few times and it felt pretty impossible to me. As it is, the boulder problem is in the vicinity of 7B+/7C and that is with the butcher’s hook in place. The butcher’s hook is a sharp, nasty little pocket that is pretty tough to hold on to and left me with a huge blood blister last time I was on it. 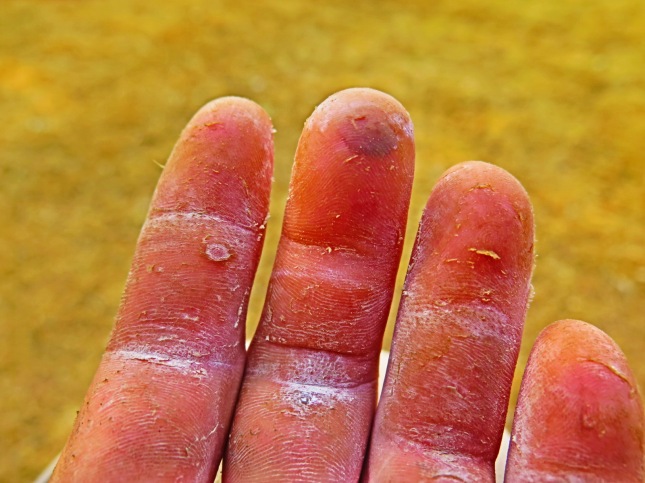 So this was the result. I had the hold in my hand and I was asked by the first ascentionist to glue it back.

The back of the hold

A little bit of sica and a lot of of effort later, the hold was back in place pretty much as close to perfect as I could get it.

Last weekend I was able to capitalize on my effort. I got the third ascent. The thing feels seriously hard still and I really can’t imagine doing to climb without the hold. My conscience is clear, but the peanut gallery sure has a lot to say… A group of guys who have never tried the climb or shown any interest in the climb, until I’m fixing it.

On to the next big thing!

David Wade snapped a few shots of my on my current obsession. Just need one good day on it and I should be able to wrap up my long-term nemesis: Rodan (8b+).

Ready to launch for the final hold–I just need to get here!!!

On a side note, got to hang out with DMM UK athletes Mina Leslie-Wujastyk and Katy Whittaker. The two of them are in Boven and then heading to Wow Prow. Mina climbed Monster, flashed Lotter’s and then flashed Snapdragon on the same day. Not bad for a boulder! She’s pretty damn awesome. Hoping to get back there this weekend and hear how she did on Godzilla! The psych with the British team was unbelievable!

This site uses Akismet to reduce spam. Learn how your comment data is processed.

Yesterday, I managed to sneak in a great little tour after work. Had to work a bit for it, needed to hike a short stretch to find the snow and of course part of the ride down was tough on the skis.
The ski season is slowly coming to a close but there are still a few good days ahead. This weekend was a great example of a great #powday.
It's the first day of March and it's warm. The snow is disappearing and it looks like an early spring. Very sad. Last year there was still plenty of snow on the ground and more coming down. Makes me a bit worried about the world.
The weekend was great! Another beautiful bluebird weekend. The temps shot through the roof unfortunately which meant that we were skiing slush instead of pow. But we made the most of it. Got in a tour in the morning and a freeride session in the adenoids on Saturday.
What a perfect Sunday... My biggest Skitour of season so far, skiing the steepest face I've ever ski'd with two of the coolest guys!
Corona is keeping me at home but does not stop my mind from wandering.

The world's most entertaining literary blog!

(Somewhat) Daily News from the World of Literary Nonfiction

Evening Sends
Girl with a drill

My name is illona and I'm addicted to climbing